NOTE: Yesterday, the Young Adult community lost one of our own, L.K. Madigan. I did not know her personally, but know many who did. Here's a blog post from her agent, Jennifer Laughran, with more information.


L.K. Madigan, you will be missed. 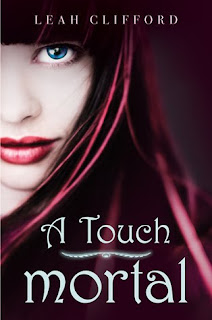 Not his saunter down the beach toward her. Not his unbelievable pick up line. Not the instant, undeniable connection. And not his wings.

Now trapped between life and death, cursed to spread chaos with her every touch, Eden could be the key in the eternal struggle between heaven and hell. All because she gave her heart to one of the Fallen, an angel cast out of heaven.

She may lose everything she ever had. She may be betrayed by those she loves most. But Eden will not be a pawn in anyone else's game. Her heart is her own.

And that's only the beginning of the end.
About Leah: Leah Clifford has been an extreme cave tour guide, a camp counselor, a flight attendant, a pizza delivery girl, a waitress, and a grocery store clerk. Now she adds author to that list. She lives outside Cleveland, Ohio. This is her first book.
Why A TOUCH MORTAL is FAB:
1. This is not your average angel book.
2. The world building is crazy like WHOA.
3. Third-person narrative. GOOD GRIEF, I miss third-person narrative.
4. I've found lately that I really enjoy writers who throw me into their book worlds without a lot of explanation. It assumes that I'm a smart reader, and that I'll hang with a story until I figure it out. (Other examples are the Cynthia Leitich Smith angel/vamp trilogy and the Carrie Ryan zombie trilogy.) A TOUCH MORTAL achieves this.
5. Honesty with the darker themes. The willingness to "go there."
6. A large cast of characters. Third-person narration was necessary, and I admire anyone who's willing to take on more than one character's direct story.
7. Hot boys. This always seems to pop up on my lists, and it is PERFECTLY FINE.
8. If you like angels, you should read it. If you don't like angels, you should read it. Win/win.
Have you read it? What did you think?
Here's what the rest of the Bookanistas are up to today!
Elana Johnson is tickled pink for The Liar Society
LiLa Roecker is blown away by A Touch Mortal
Shannon Messenger can’t lie about her love for The Liar Society
Shelli Johannes-Wells burns for AngelFire
Scott Tracey is more than a touch impressed with A Touch Mortal
Myra McEntire is A Touch Mortal this week
Beth Revis tells the truth about The Liar Society
Christine Fonseca is leveled by Leverage
Carolina Valdez Miller has tons to say about One
Jessi Kirby soars for Across the Universe
Jenn Hayley adores The Liar Society
Shana Silver can’t imagine you not reading Imaginary Girls
Katie Anderson wants to be Like Mandarin
Matt Blackstone loves The Hate List
Stasia Ward Kehoe falls head over heals for Fall for Anything
Sarah Frances Hardy sings her praises for Mockingbird
Veronica Rossi thinks Unearthly is otherworldly
Michelle Hodkin champions A Dog's Way Home
Posted by Myra McEntire at 2/24/2011 06:00:00 AM

Email ThisBlogThis!Share to TwitterShare to FacebookShare to Pinterest
Labels: Bookanistas